During our time in the Missoula Mercantile, one of the project’s eight sites (thus far), we conducted an archaeological surface collection in a basement room. A surface collection involves a systematic recording and collection of artifacts without digging and minimal disturbance to the ground. During the initial deconstruction for renovations on the building, the wooden floor had been removed because it was not in the greatest condition and not salvageable. Left behind as a result was a dirt and rubble floor. 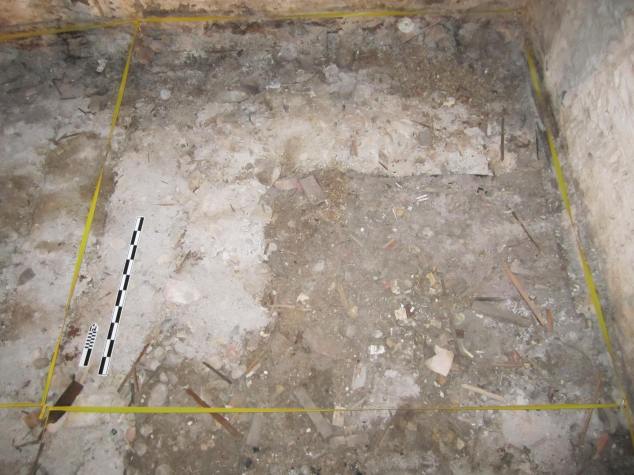 The dirt and rubble floor of the basement room which was once part of the the Garden City Drug Store before becoming the tobacco and liquor department of the Missoula Mercantile.

During the initial walk through the room, one of the crew almost literally tripped over a tobacco pipe, much to everyone’s surprise. This is when it was decided that the surface collection could provide some potentially valuable information.

Since the pipe was the first artifact to garner our attention, it will be the first of future artifact posts on this blog. Many interesting artifacts were found during collection!

Tobacco pipe in situ (in place as found). The tobacco pouch was moved there as a reference. Finding them together would have been quite the coincidence.

Upon cleaning and careful examination, it was noticed that the pipe had a broken – not wooden – bit and nearly illegible maker’s marks. After some research and a very good microscope, we were able to determine that the inscription read “French Briar.” Briar is the primary wood from which tobacco pipes are made.

The French Briar Bulldog pipe “has a slightly forward tilting bowl, beveled at its top portion and tapered toward its bottom, and a diamond shaped shank. Traditionally there are one or two small grooves, called bead-lines, cut around the bowl.¹” The broken bit was made of amber, a fossilized resin that is present under tree bark and commonly used for pipes in the 19th and 20th centuries. 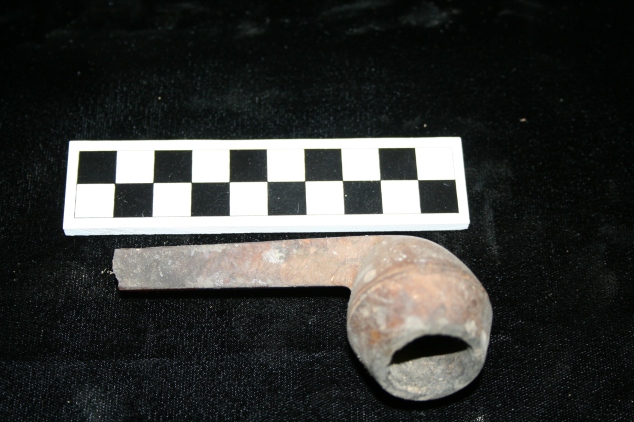 The pipes could be purchased from the Sears, Roebuck, and Company catalog for anywhere from 98 cents to $3.48 depending on the detail.

Page from the Sears, Roebuck and Company catalog circa 1900.

The Crystal Barber Shop in the sidewalk vault of the Montana Building, 1912. Photo from the Mansfield Library Archives and Special Collections.

During the course of the Missoula Historic Undeground Project we heard many stories about how the underground was built and used by the Chinese immigrant population in the early days of Missoula. This claim is by no means isolated to Missoula. Take an underground tour in some of the larger cities such as Portland, Oregon and Seattle, Washington and you’ll hear similar stories.

Rumors of secret underground passages of the Chinese are not new. On March 6, 1900, it was believed that the Black Plague had descended upon San Francisco and that a man recently arrived from China was patient zero. The mayor of that city asked for physician volunteers to complete an inspection of Chinatown (then twelve city blocks) to look for evidence of others stricken with the disease. 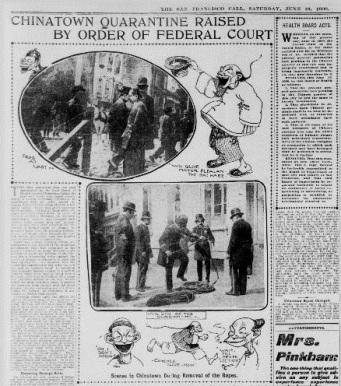 Dr. William G. Hay was one of the first to volunteer and his claim was that “he and fellow inspectors had to crawl through an intricate maze of rat holes that connected the houses in an underground network of secret passages” and that relatives would be able to move the sick through these passages “with such neatness and dispatch that no white man can follow them” (Kalisch 1972:119).

Some underground spaces investigated during the Missoula Historic were bigger than others.

This is actually the sub-basement UNDER the basement!!

The museum levels on the Earthscraper would display Aztec artifacts from the site’s past.

“Culture is replete with the concept of civilisations living underground. It crops  up in everything from HG Wells to Elizabeth Beresford. Of course, Wells’ underground dwellers were mutated cannibals and Beresford’s were pointy-nosed mammals with an excellent grasp of English and an ecological bent, but the exploration and exploitation  of the realm below the surface has been a trope for decades.”

Read more from The Engineer 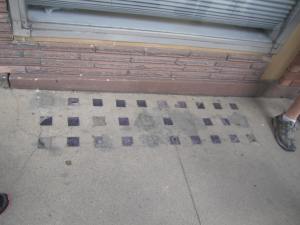 One of the few remaining sidewalk vault light panels in Butte, Montana, 2013.

Invented in 1845 by Thaddeus Hyatt, sidewalk vault lights started being used in urban areas beginning around the 1850s and continued to be popular into the 1930s. The first vault lights were engineered to have glass blocks placed into a cast-iron framework. Later, with the introduction of Portland cement, setting them into reinforced concrete panels was more common. 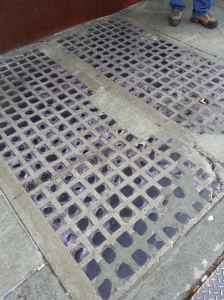 Sidewalk vault light panels in San Francisco, California, 2015. This is one of the most intact panels I have ever seen.

These “lights” provided a way to get light into the useful basement and void areas under the sidewalks. This also made the space rentable in some cases. First attempts at vault lights proved unfruitful because the design basically allowed a single shaft of light to shine straight down into the space below. With Hyatt’s invention, the design incorporated a prism shape (“saw-tooth”) on the underside while the surface above remained smooth to walk across. This provided a way for the light to be directed over a broader area in the dark underground.

Faced with the pressure of typical sidewalk use over the years, many glass blocks have been broken and loose seals have caused them to fall out entirely. For obvious reasons, this creates hazardous walking conditions as well as allow water and other debris into the space below. Yet repairing virtually unnecessary sidewalk vault lights can be considered costly and challenging when compared to the simple solution of removing or covering them with asphalt or concrete. The need for an experienced contractor and locating supplies and fabricators for the glass blocks and sometimes the cast-iron panels are not the only challenges. Today building code and load requirements are quite different from the 19th and early 20th centuries; especially when taking into consideration that the void space under the deteriorated sidewalk lights might need structural work as well.

A glass “saw-cut” block from a sidewalk vault light panel in Missoula, Montana, 2012.

However, repair and maintenance of these beautiful architectural features is not as difficult and expensive as it may seem. Restoration projects in various urban areas show that, “sensitively rehabilitated vault lights can continue to provide architectural and historic character to the urban streetscape while serving their original function of naturally illuminating basement spaces” (Stachelberg and Randl, 2003). 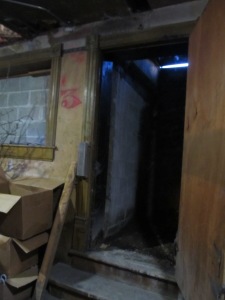 Door into the sidewalk void from the basement. A concrete block wall can be seen which blocks entrance to the void itself.

Large, blocked window facing into the sidewalk void from the basement. Window is to the east of the door.

Smaller, blocked window facing into the sidewalk void from the basement. Window is to the west of the door.

In the last post, we looked at a little bit of background about the Historic American Buildings Survey (HABS) and some of the guidelines for taking measurements for a HABS quality map in a historic structure. In Part 2 here, we will look at the guidelines for how the final drawings should be completed and look at an example from the Missoula Historic Underground Project.

When producing the final drawing of a HABS map, it is best to first use graphing paper. For the Missoula Historic Underground Project, we typically used 8 squares per inch. If the drawing will be submitted to the Library of Congress for adding to the collections, pre-printed sheets of HABS standard mylar are available from the HABS office upon request. The drawing can then be transferred onto this mylar paper to remove the graph paper lines for a cleaner look. Some of the other requirements are:

Even the text and legend/title box has guidelines that must be followed:

Plan map for the basement of one of the MHUP sites. (Image is scanned in B&W but the dimensions would be in another color besides black.)

Above is an example of a HABS quality map from the Missoula Historic Underground Project.

Documenting the spaces when surveying a site for the the underground project is one of the most important steps in the survey process. Maps are carefully drawn in order to understand the scale of the spaces being examined and also to know precisely where features, such as underground doors and windows, are located. Accuracy and attention to detail is critical so we use guidelines that are set up in the Historic American Building Survey (HABS).

The Historical American Building Survey was established in 1933, during the Great Depression, as a means to supply 1,000 architects who were out of work with jobs. What began as a 10 week project has since functioned as a guideline in a standardized format for recording and documenting historic structures. The HABS program is operated by the National Park Service, the Library of Congress and the American Institute of Architects. HABS drawings, as long as they meet the guidelines, can be submitted to the federal database held by the Library of Congress.

The history and collection of HABS documentation can be viewed on the Library of Congress website here.

For the Missoula Historic Underground Project, the standards were followed as closely as resources and the documentation process would allow. For instance, these guidelines for measurements:

In the next post, HABS Part 2, we will look at the guidelines for how the final drawings should be completed and look at an example from the Missoula Historic Underground Project.

Archaeological Survey student Ryan D. exploring a set of stairs to “no where” in a downtown Missoula basement. Fall 2013.